Ah, Mykonos: the party of the cycladic islands, known for its fun beaches, fancy commercial shopping and wild night-club life. 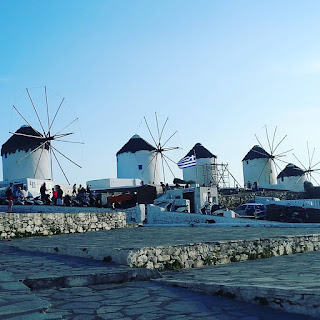 Lenni spent her formative years summering in Greece during a unique ballet program that her mother founded, which brought an opportunity for American students to train and dance with Greek students. 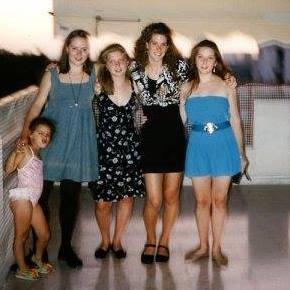 Mykonos was always a hot-spot on this trip. As a young child Lenni practiced her duck-face and dressed in her cutest summer outfit in preparation for the day when she too could dance with the sexy fruit boy at the famous "disco-techs!"

...while the desired outcome of the experience has altered for Lenni, Mykonos' charm and sparkle lived up to the standard set all those years ago.


Our Hotel:
Mykonos is a tourist hub, which makes it quite expensive. We chose to stay in Mykonos Town, walking distance from everything, and we were able to find an affordable GEM of a hotel: Hotel Madelena. 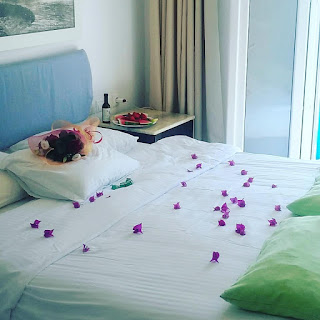 This hotel also offered complimentary breakfast and free transport to and from the ferry port which saved us some major money on such an expensive island! This was also the most comfortable bed we slept on in Greece. 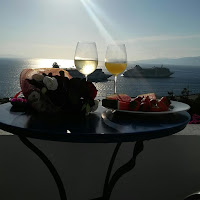 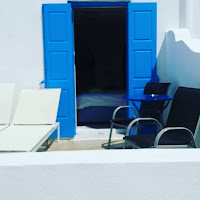 
They also offer a romantic package, which includes vintage Greek wine, Greek chocolate, fresh fruit, roses, and bougainvillea petals across the bed. Although our package was not ready for our arrival, we were able to enjoy our final sunset with these wonderful treats!

Oh, did we mention that we had an incredible view of some unexpected fireworks?

Must Dos:
Shopping and "Disco-Techs" 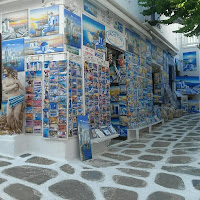 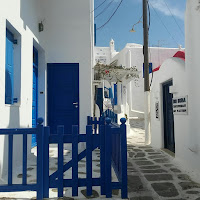 On this island, you will find all the same commercial designers, stores and businesses you will find in any major city. It goes without saying that wandering the maze of blue and white appointed streets is the best way to discover one-of-a-kind boutique shops and hole-in-the-wall restaurants. 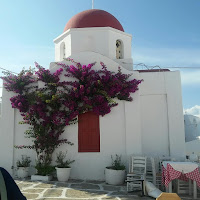 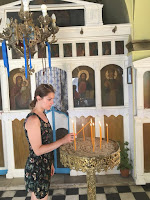 Getting lost among the shops and small churches was one of our favorite things to do in Mykonos!

We also began to notice a trend on this island. While nightlife is going on, many of the small churches remain open for prayer, viewing, and candle lighting. 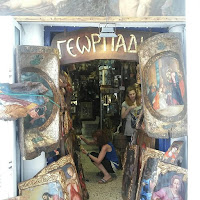 What you should note is that around 11pm EVERYTHING, even tiny coffeeshops that one wouldn't think would lend themselves to partying, transforms into nightclubs formerly known as "disco-techs."

We stayed out and saw a bit of this transition. But being the 80-year-olds we are, we preferred to walk-about the town while everyone else was paying entrance fees to get hammered and bump and grind to loud music ;-) 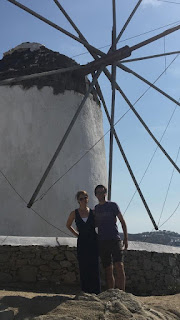 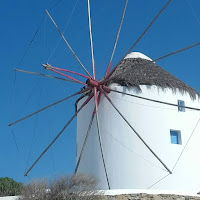 The Windmills of Mykonos are clearly the centerpiece of this island. Take a stroll up for a photo-op and a beautiful view. The windmills are very accessible from anywhere in Mykonos Town. 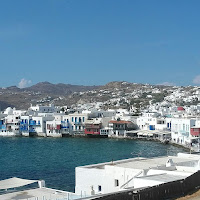 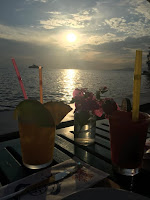 From the windmills, walk down to the water toward the waterfront bars and restaurants. This area is part of what is known as "Little Venice."


From any of these restaurants pictured here, you will witness a glorious sunset to the right with the Windmills insight on the left.


Quick tip: Many of these restaurants will not take reservations during the sunset. We made a 7:30 pm reservation at Sunset Taverna and milked our meal to make it through the 8:45pm sunset. 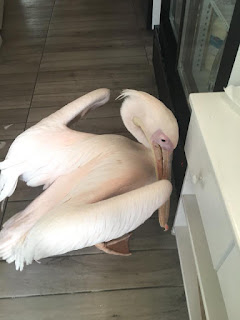 Surprise! We had made it a goal to find Petros the Pelican, the iconic Mykonos mascot, and discovered him literally inside our restaurant "helping" the owner work on his computer. The relationship between these two was incredible! Legend has it that a Mykonian fisherman discovered a wounded pelican and nursed him back to health. The pelican remained on the island and was loved by locals and tourists alike. Although the original Petros passed away many years ago, he became so synonymous with Mykonos that there are 3 pelicans currently residing on the island, one of whom was also wounded and taken care of by locals and another who was donated by Jackie Kennedy!

Quick Tip: Keep your eyes out for one of the three pelicans particularly around the harbor front where they are rumored to hang out!

What to know about the Beaches: 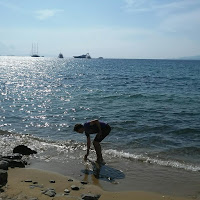 All right, so Mykonos is known for its beaches, but we are going to offer you a different view. In order to get to these beaches, you will need to take a short bus ride for a few euros. Not a big deal. We chose Platys Gialos. We didn't realize that there is no public area to put down a towel and hang out. You must pay for a sun-bed or service through a restaurant. This is not our jam at all and within minutes, we hopped a bus back to Mykonos Town where found a spot on the public beach on the outskirts of little Venice. It wasn't super clean, but for the purposes of sunning and dipping in the water, it was a better option. 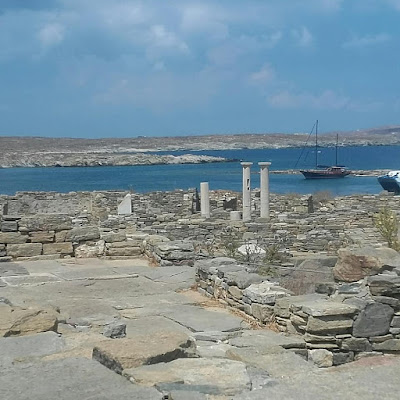 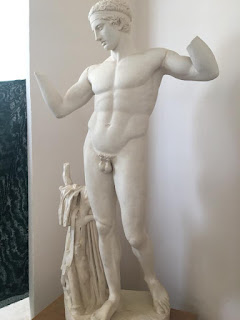 This sacred archaeological site is thought to be the birthplace of the god, Apollo and his sister, Artemis. It was also a center for trade, making it quite a wealthy and exclusive island in ancient times. You see this in the remains of the homes and mansions that extend across the island. Overtime religious rule dictac\ted that all burial sites must be removed from Delos, and later on, births and deaths were forbidden here...go figure... 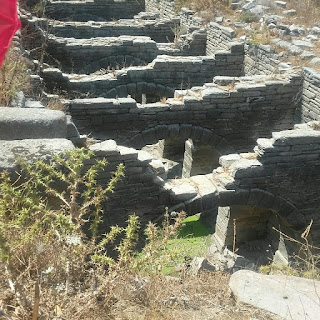 We love this kind of stuff and would highly recommend this half day trip. We left around 9am and were back by 2pm. The 30-minute ferry ride out of the old port in Mykonos to the island of Delos was relaxing, and the sea breeze offered some relief from the hot sun. We booked our group tour through Get Your Guide Tours. Although finding our tour guide once we got off the ferry was a bit challenging, there are very few tour guides available on-site, and we were able to get right through the crowded entrance line (which can take over an hour on busy days) due to our tour guide's practice at rushing  off the ferry to grab her group's tickets! 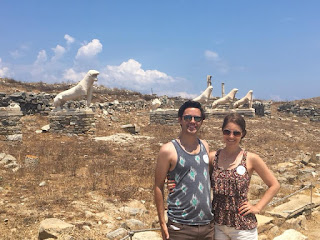 Barbara, like each of our previous tour guides, was incredibly knowledgeable about the site. What made her tour so unique was her fusion of etymology with ancient Greek culture and mythology. 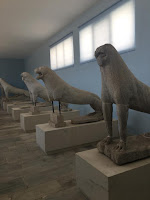 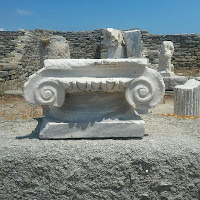 The most famous landmark here is the Terrace of Lions that date back to 3,000 BC. These marble statues were given to Delos as a dedication to Apollo from the island of Naxos. While the photo-op is outside with the replica lions, you can check out the 5,000-year-old lions and other marble and stone collections inside the small museum on the island. 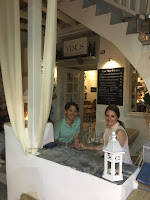 We did a little bit of everything here. Outside of the waterfront sunset dinner, we made no reservations. It was enjoyable to spontaneously pop into beautiful spots on more hidden streets. 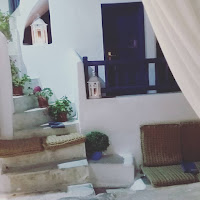 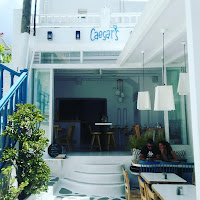 A stand-out was Vinos Wine Bar and Restaurant. If you are stopping for a drink, you can sit on cushions that adorn the stairs and benches built into the sidewalk, lit by lanterns as the night-life strolls past you. Devon is still raving about his Greek pizza from Vinos!

If you are looking for delicious and filling lunch snack that pairs beautifully with a frappe, try the fried feta and honey at Caesar's! 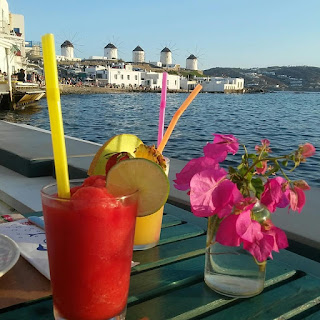 It is hard to believe that Mykonos was our shortest stay! This was the first (mostly) unscheduled stop on our honeymoon and we were in our element here. Although not romantic in the same way as Santorini, the views will forever be imprinted in our hearts.
- July 07, 2018