It's been 8 months since we were MARRIAGED! And we are deeply grateful for having had to wait for this.  Our honeymoon was idyllic, and to be honest had we tried to plan the details of this honeymoon in tandem with our wedding, the experience would not have been this level of perfection. 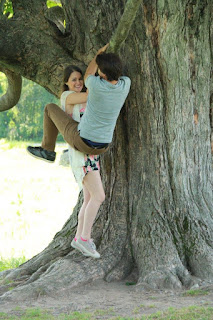 When traveling to Greece and several islands for the first time, it is important to do research. Lenni was fortunate to have her parents as a sounding board for the planning process. Figuring out what neighborhoods in both Athens and on the islands would allow the fullest experience with minimal transportation was a huge part of our success.

Hotel:
Our stay in Athens was our splurge. We chose a top hotel and selected an "Athenian Panoramic Room" at The Royal Olympic. You see this photo taken from our floor to ceiling bedroom window? This is the Temple of Zeus. 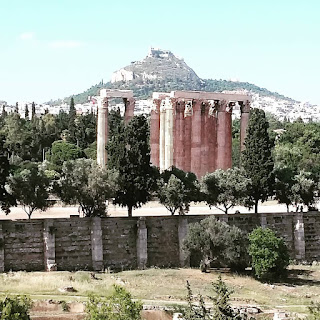 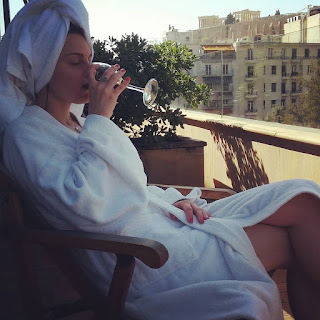 Oh, and that thing above Lenni's head? Yeah, that's the Acropolis. No big deal. 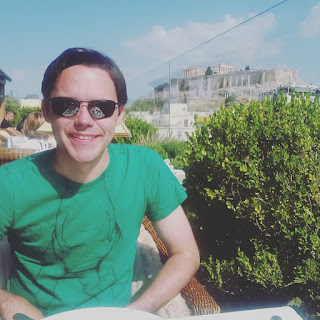 But seriously, it's not a brag. We don't have money for this sort of thing. But when staying in Athens, there is an opportunity to be in another crowded, and in some areas, dirty city...or the opportunity to become immersed in its monumental history. We chose the latter and found that Athens stayed with us when we retreated to our beds at the end of a long day of sightseeing and was there to greet us when we started our day with a Greek Coffee the next morning.

Also being walking distance from everything was key to seeing everything efficiently!


Quick Tip: If you can find a hotel that has complimentary breakfast it will be a major money saver!

Must Dos in Athens: 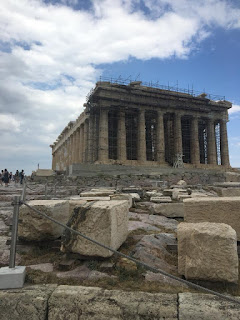 It goes without saying that the Parthenon at the Acropolis is the literal centerpiece of the city. It is breathtaking.

Quick Tip: We found that waiting until after the tour groups left at 2pm made our visit quite an intimate experience. We went around 4pm.

We stopped by the Acropolis Museum around 2:30, which absolutely informed our trek up the iconic hill. There was no line when we entered, but by pure luck the  main rush of the day was in line as we exited around 3:30pm. 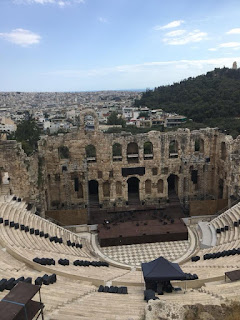 One of our favorite spots on the Acropolis was Herodes Atticus. This ancient, acoustically perfect amphitheatre is still in use. The Yanni fans will recognize this view ;-) If you have the chance check out a show here. STING was playing while we were there!!! ...but alas, we did not research soon enough and it was sold out.

But seriously, there are a lot of great traditional and modern Greek artists that play here. You can even catch a ballet if you're lucky! 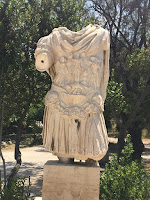 Another Must Do that doesn't get as much note as the Acropolis is the Ancient Agora. This essentially was THE meeting spot and marketplace for civilians. It was also a work and trade area for craftsmen. This is the place where Plato became inspired by Socrates, and the site where Diogenes, the cynic sat in his bathtub out in public searching for "an honest man."  You will find statues, a gutter system, an ancient theatre, and a variety of ruins. 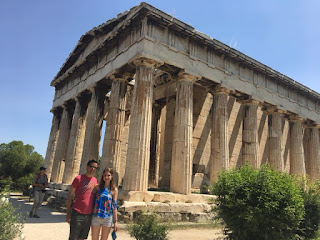 The Agora houses the Temple of Hephaestus, the god of fire, metalwork, masonry...well, he was a craftsman, so he appropriately watches over his own at the Agora. 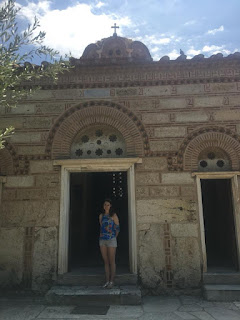 If you keep walking upwards along the main path towards the Acropolis above you, you will come upon the Church of the Holy Apostles. Although it is more modern compared to the rest of the Agora, it was the prototype for what is now considered the Greek style church. 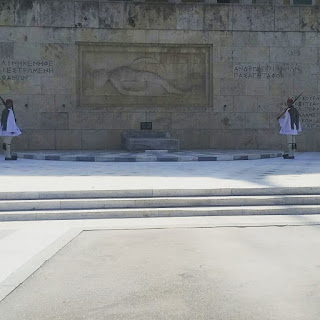 If you are in Athens on a Sunday, schedule your day around watching the changing of the guard at the Tomb of the Unknown Soldier at Syntagma Square at 11am. There are smaller guard changes every hour, but once a week there is an actual PARADE with a full band for a stunning processional at the guard change. The uniforms are traditional and precision of these solider's is astounding. According to my cousin who lives in Athens, the criteria is quite elite to become one of the Evzones (processional unit of the Greek guard). Guards are paired not only based on similar looks and features, but they are trained so intimately for their perfectly synchronized movements that if one of the pair is unable to do his shift due to illness, both will be replaced for the shift.

Quick Tip: Arrive early so that you can see, and check out Parliament and the old Royal Pace while you wait. 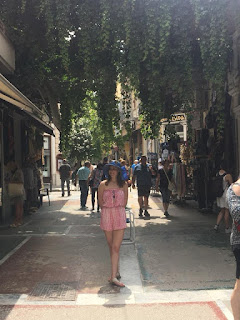 If you are heading to the Acropolis, you will likely pass through the old neighborhood of Plaka. The main street for shopping in this quaint, cluttered and narrowly laid out area is Ermou Street. On and off this main drag you will find wonderful Greek tavernas for frappes or sovlaki.

Quick Tip: If you can order your coffee in Greek and say please and thank you, the locals at restaurants will be crazy about you! 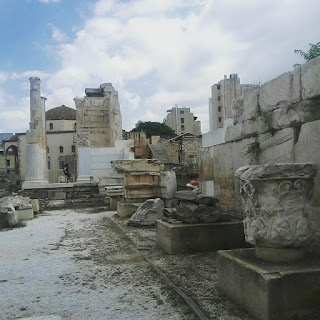 Monastiraki is another must do neighborhood. What is fascinating about Monastiraki is that the modern tram line runs literally next to ancient ruins. Nestled in this area you will find flea markets and tavernas on Adrianou Street, and the ancient historical site of Hadrian's Library. 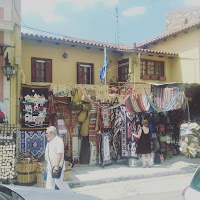 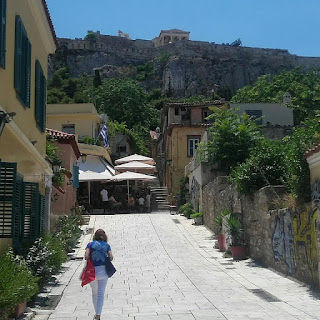 Our favorite neighborhood was one we stumbled upon. Anafiotika is at the base of the Acropolis.  Here you find a never ending uphill trek, very few houses, and more cats that residents. Stop for lunch (you'll need it!) at one of the many adorable tavernas with seating on steep stairs.

If you look up, you will always find the Acropolis looking down as a reminder that all of this modern growth was birthed from one of the earliest civilized people.

Food:
We budgeted for WAY more than we spent in Athens. To be honest, it is the touristy islands that will burn a whole in your wallet. If you like Greek salad, feta, sovlaki, meatballs and coffee you will be fine stopping in at any cute taverna that turns your head.

If you are looking for something special, go to Orizontes. This fine dining restaurant sits atop the highest point in Athens: Lycabettus Hill. They have a set menu and a regular menu. Everything we had was delicious and much less expensive than we anticipated. 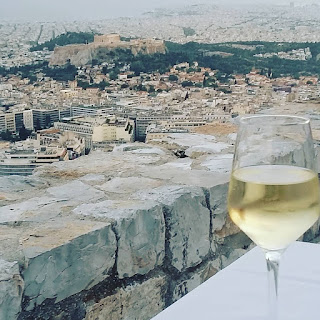 We were lucky to be seated in at one of the prime view points...

...but we'd venture to say that this cat has the best view. 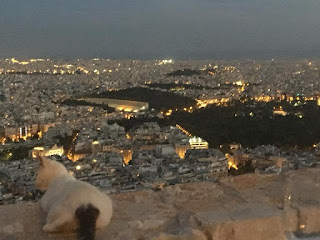 Quick Tip: Make an outdoor reservation for a half-hour before sunset and then arrive 15 minutes early. You have to take a very slow cable car up the inside of the mountain, which is very cool, but it made us late for our reservation.

Excursions out of Athens:
There is a lot of mainland to see in Greece, but we chose to stay in Athens proper for the majority of our 4-night stay. We were lucky to spend some time with Lenni's Greek family, who lives in a neighborhood called Kalithea in Athens. If you have the chance to interact with locals, accept their beautiful hospitality, hugs and kisses, and hang out around the less touristic night-life. Entering a Greek city home and dining at 10pm in a neighborhood farther from Plaka, Monastriaki and Anafiotika illustrates what daily life is like for these positive people, who live under the faithful watch of their hovering history. 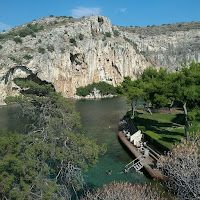 If you are anxious to get to the water, travel south and visit Vouliagmeni Beach. If you keep traveling toward the southern most tip of Attica, you will pass the natural hot springs. 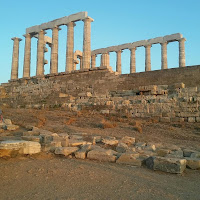 About 90 minutes south of Athens, you will come to Cape Sounio and the Temple of Poseidon. This is the alleged spot where King Aegeas threw himself to his death, giving the sea it's name: the Aegean. More importantly, this Temple was a militarized area for all incoming water trade. 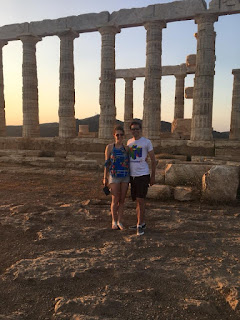 We signed up for an excursion to visit the Temple of Poseidon at sunset through Get Your Guide. The entire day was probably about 6 hours. As people who really enjoy history, particularly ancient history full of mythology of gods and heroes, the long car ride with our well studied Greek guide made the time go by quickly. Our guide, Christos, studied history in both Athens and London, and was a fountain of knowledge. We were given a full overview of 3,000 years of Greek history during this tour, but still couldn't get enough.

If you do not enjoy learning the history of another culture this probably isn't something you should sign up for.

But also...the sunset atop this ancient ruins was one of the most beautiful things ever...so make the trip for that. 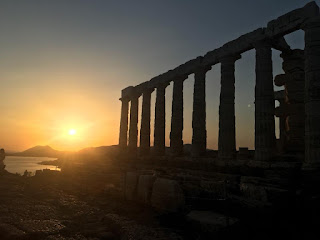 Quick Tip: Did you know that the former and still proper name for Greece is Hellas? Rumor has it that Ancient Greek colonists traveled to what is now modern day Italy. Upon arrival, they  were misunderstood by the Latin speaking culture, who began referring to them as "Graeki." Apparently the British spread the word, and the term Greek stuck!


Athens was both majestic and exhausting. We just couldn't do it all in three days... 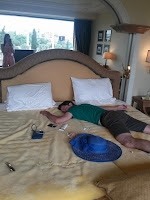 well, Lenni probably could have, but Devon was clearly not up for the challenge ;-) But that just gives us a reason to return soon....

Keep an eye out for upcoming posts about Santorini, Mykonos and Paros!